Today we have a marvelously oddball interview conducted by two marvelous oddballs. If you are ready for a trip to The Beyond—a dreamscape of oracular monkeys, ouija boards, and curry tofu cutlet (with pics!)—pull up a chair and sit a spell.

[Fair warning: do not read this interview if you are hungry, because by the end you will be RAVENOUS.]

Henry Lien is the author of PEASPROUT CHEN, FUTURE LEGEND OF SKATE AND SWORD, a magical MG out from Holt/Macmillan on April 3, 2018 (so soon!). Peasprout Chen dreams of becoming a legend of wu liu, the deadly and beautiful art of martial arts figure skating, as the first student from the rural country of Shin to attend Pearl Famous Academy of Skate and Sword. Tensions rise when the dazzling pearl buildings of the Academy are vandalized and outsider Peasprout is blamed for the attacks by her rivals…and even some friends. Now, she must uncover the true vandal to ensure peace between Shin and Pearl—all while becoming a champion.

Henry is a 2012 graduate of Clarion West. His short fiction has appeared in publications like Asimov’s, earning several Nebula Award nominations. Born in Taiwan, Henry currently lives in Hollywood, California.

Camille DeAngelis is the author of THE BOY FROM TOMORROW, a middle grade fantasy out from Amberjack Publishing in May. Josie and Alec both live at 444 Sparrow Street. They sleep in the same room, but they’ve never laid eyes on each other. They are twelve years old but a hundred years apart. The children meet through a handpainted spirit board—Josie in 1915, Alec in 2015—and form a friendship across the century that separates them. But a chain of events leave Josie and her little sister Cass trapped in the house and afraid for their safety, and Alec must find out what’s going to happen to them. Can he help them change their future when it’s already past?

Camille is the author of several adult novels, including the Alex-Award-winning BONES & ALL. Her book of practical philosophy, LIFE WITHOUT ENVY, was published in 2016, and the second edition of her guidebook MOON IRELAND came out in 2017.

Camille is also doing a giveaway THIS WEEK: Check it out right here (and enter before Friday).

Henry: Camille, is that you? Are you in The Beyond?

Camille: IT IS I—IM SITTING AT A OUIJA BOARD IN THE YEAR 2067—WHEN ARE YOU HENRY? IS YOUR FIRST BOOK OUT YET? BECAUSE I CAN TELL YOU ITS A CLASSIC FRIEND—IVE LOST TRACK OF HOW MANY TIMES YOUVE WON THE NEWBERY

Henry: It’s 2018 over here. An ugly time. Stay where/when you are! And look at the bottom of that Newbery plaque, I scratched a message to you…

Camille: [racks brain trying to think of a witty rejoinder]

Henry: Camille, I’m ready to take the Vow of Non-Revision for this convo if you are. To anyone reading this who is not Camille, FYI, we’re conducting this conversation in real-time via ouija boards (aka Google Docs), and we have agreed not to edit or revise anything we write.

Camille: …WE HAVE? [LOL]  [says Camille as she frantically deletes things she typed above]

Henry: Yeah, let’s give them unpasteurized convo. Plus, I’m hovering on the precipice of a partial meditative state, so going with the flow of what comes out . . . A form of divination. Can we talk about your book for a moment and the idea of divination?

Camille: I want to talk about [to?] Chingu the monkey from PEASPROUT CHEN!

Camille: Well, you brought the wine, so it’s only fair that you ask the question…

Henry: I’m feeling from the ripples in the ether that you want to know how she feels about being an oracular monkey?

Camille: I really would. For everyone reading at home, Henry and I are both vegan—and I don’t know about you, Henry, but I have found that my whole experience of fiction changed (reading it and writing it) when I became more aware of all the ways we use and exploit animals. Like, no wonder Chingu’s hitting the bottle. #kiddingnotkidding

Henry: Yeah, being vegan is as important and enriching a part of my identity as being Taiwanese-American and gay. They all give me a lot of joy but I’m also awakened to the breathtaking arrogance and entitlement of humans in their thinking about using animals. So with Chingu, you’ve got a monk who is to receive the bolt of heavenly enlightenment but it misses and hits his pet monkey instead. And the monkey is imbued with all the divine powers of a god and none of the self-restraint of a person, and so she’s this hilarious and poignant unbottled id of rage. She got hold of a cleaver once twenty-five years ago and no one’s been able to get near enough to her to take it away from her since. Don’t let them, Chingu! You deserve your rage!

Camille: That’s why I loved that she never once let go of that cleaver. And can we talk about the school banquet?! Your narrator, Chen Peasprout, is horrified when her dinner blinks at her. What was going through your mind as you wrote that scene?

Henry: Food is so loaded! People invest so much of their identity in their foods. So I wanted to write a food scene that was a carnival ride with our heroine having to navigate cultural difference. And then contrast this with the vegan recipes that her friends whip up that read as delicious menu descriptions, in a carrot-stick approach to the subject of veganism. How about you? I’d like to hear how vegan/animal topics find their way into your work.

Camille: Two things before I answer your question: the scenes where Hisashi was sharing his meals (and compassionate perspective) with Peasprout were some of my favorites in the book. Someday I’m going to show up at your house and demand you cook me the meal he prepares for her on page 148—the fancy mushrooms and sweet potato and rice and sesame oil and star anise! And you reminded me of this great line [vegetarian author] Jedediah Berry has in a story of his: “Beast! Oh, Beast! You are the only one of your kind, and that is why we must eat you.”

Henry: That quote is infuriating!! Humans suck sometimes. And I love that recipe! I’m going to make a batch of that or else peanut butter noodle (a recipe from book two) for my book launch. Give me your address and I’ll FedEx you a baggie of leftovers!! Okay, we’ve reached the halfway mark on our Word Count and haven’t included a single picture of food or animals and that’s just plain wrong. Pictures of your food or animals, pronto, please.

Camille: My pot’s all ready for that baggie of savory porridge, Henry. It’s getting hungry out.

Henry: I’ll trade you one snowflake cake pic for one bird pic. 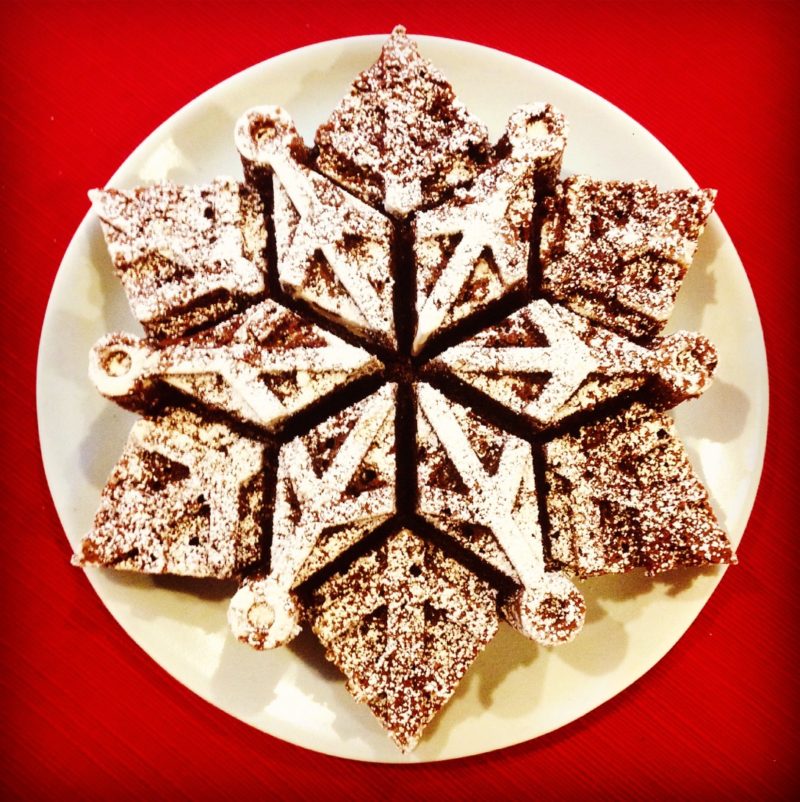 Spice cake dusted with organic confectioner’s sugar, recipe by Fran Costigan. It was SO SCRUMMY!

Henry: Whoa. That’s seriously pro-level pretty. I can almost smell and feel it. Intimidating. But fair is fair. Here ya go: 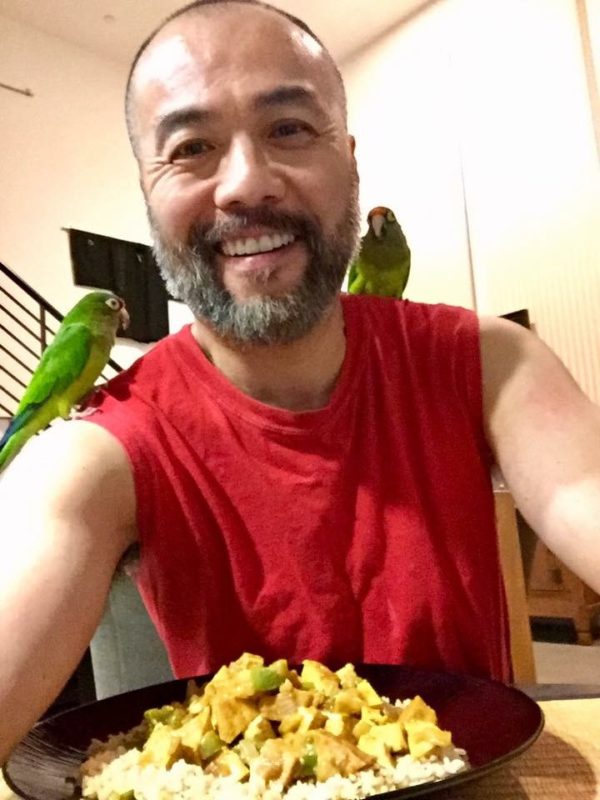 I love seeing these windows into each other’s worlds. There’s a reason for this primal impulse to share food pictures on social media. Food is identity, as we said above, but the sharing of images of it gives us a portal into our every day worlds, a way for this flat screen to be a window. Sort of like a ouija board [he says as he pivots the conversation back to Camille’s book] There’s something about the way that ouija boards are treated in your book that is really powerful as well as a whole lot of fun. And it’s the idea that it’s a two-way conversation. It’s a book that you read, but that reads you back. There’s a lot of symbolic, deep Jungian stuff baked into that. I want to hear you talk about that.

Camille: You gave me mad chills just there, Henry! Way less scary than “looking into the abyss and the abyss looking back,” though, that’s for sure.

Henry: Yeah, the Nietzsche quote sprang to mind but so did Philip K. Dick’s “The Man in the High Castle” and I mean that as high praise. The idea that this thing you are reading is looking into you at the same time is confronting and uncomfortable until you decide that it’s not going to be confronting or uncomfortable. It’s a metaphor for connection, for being emotionally available enough to “be read.” For relationships being a two-way street. These are rich, resonant themes elegantly built into the very architecture of the plot. I really love that.

There’s also a metaphor for reading in there as well if one chooses to see it. For many people, the best books are the ones that make you feel like that they did an X-ray of your insides. It read you as much as you read it. Finally, I love the idea that both sides of the conversation through the ouija board(s) think that the other side is a ghost. I think that those who love books deeply, especially children’s lit, sometimes feel like the lives in those books are more vivid, more real, more alive than their own lives. That we’re the figments, not the other way around. The best books can make some readers question whether their lives are as alive as they could be. I thought that your book did a beautiful job of suggesting that, but showed great restraint in leaving it in subtext, always in respectful, gossamer subtext.

Camille: EXACTLY EXACTLY!!!!!!!! This is AMAZING. It is such a pleasure to watch you articulating everything I had hoped to convey. Jung pops up in the book more than once. Wait, did you get to read the whole thing after all? I can’t believe you’d read all this in the first three chapters!

Henry: Only read the first three chapters. But it hit me with a wallop. Maybe I’ve just been waiting for this book. Maybe it’s reading me!

Camille: WHAT! I’m convinced you got some sort of psychic download in your sleep then.

Camille: I knew that was going to happen!

[Editor’s note: I knew it was going to happen, too. I didn’t care, I just wanted more food pics. -BB]

Henry: What should we do?

Camille: I don’t want to cut anything you wrote. It’s so utterly perfect. I couldn’t write about my work as well as you just did.

Henry: I’ve been waiting to rave about your book! I don’t want them to cut anything but the walls are caving in on us so I’m hereby invoking Chingu’s once-every-88-year power to halt the admins [ahem] from amputating anything from this conversation! You Shall Not Cut! But we should probably say buh-bye because rules are rules.

Camille: I didn’t intend to include what I wrote just above though. How shall we edit?

Henry: Let’s leave it! I took a vow, even if you didn’t! I’m not cutting my replies so if you cut your comments, it’ll be weird! Let’s keep it extra virgin unbleached. [Always happy to keep my virgins unbleached.] But OMG, way over word count.

Camille: If I can get just one more line in: EVERYBODY GO READ HENRY’S NOVEL ASAP. It is so full of wisdom and heart and the worldbuilding is the most vivid and astonishing and complete I have seen in any novel, ever ever ever.

Henry: And your book is so up my alley, it’s like you did a brain-scan and wrote it for me. Thank you!  So with that I think we should say:

Well, I don’t know about you, but I am STARVING—for peanut butter noodle and also for the collective unconscious. Let’s all thank Henry and Camille for tearing the fabric of space-time to give us this deliciously eccentric interview!