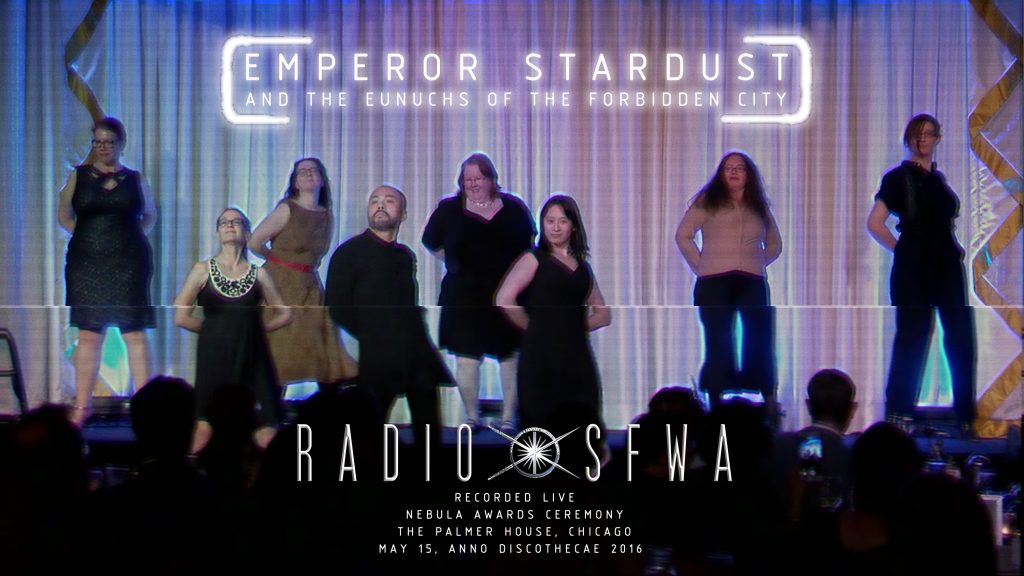 This is an ’80s New Wave/Space Disco recruitment anthem that I wrote for Science Fiction & Fantasy Writers of America (SFWA). It was performed at the Nebula Awards Ceremony in Chicago, May 2016.

I chose ’80s New Wave as the idiom because it was a whole genre of music focused sonically and lyrically on themes of futurism. There is nothing like looking at past decades’ visions of the future to remind us that futurism is usually an exercise in exorcising the fears and anxieties of the time in which the work was produced. Further, ’80s New Wave focused so much on alienation and embraced coldness and loneliness in a way that was new to music. I thought those were appropriate tonal choices to use in portraying the experience of many writers. Further, many writers are motivated to create their work because being read by others feels like a way to salve this alienation. I wanted to emphasize that an organization like SFWA is another way to address this. For those reasons, the coldness of ’80s New Wave was perfect. Also, despite the coldness, New Wave is colorful and joyous, unlike say post-punk, so it seemed like a great style to use to depict a bleak topic that was nonetheless embedded with optimism.

Obviously, Bowie was also a big influence on the song. Not only did he help to prefigure New Wave, I can’t think of a figure in pop music who has been able to make so many outrageous choices and still remain unassailably cool. Thus, invoking Bowie gives me nerve.

Regarding the lyrics, I wanted something ironic and camp because I think that SFF can sometimes be guilty of being a bit humorless, which in my opinion means that it is leaving out a basic emotion.